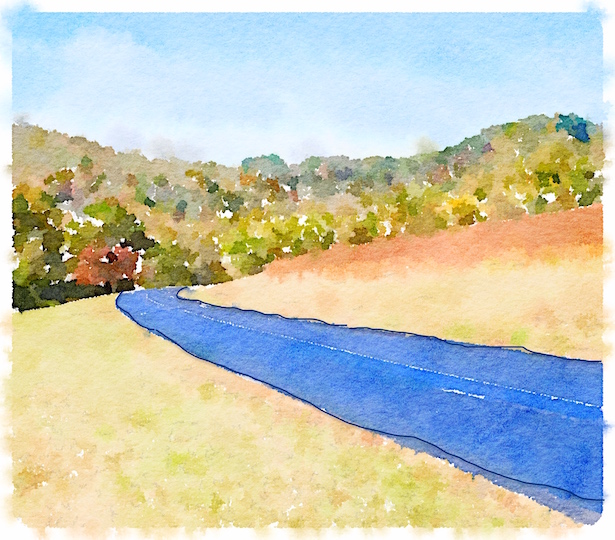 Ever been on one of those back country roads in the South rambling through cornfields and pecan groves, passing by roadside stands, and circuitously winding your way through unfamiliar territory?  On these roads, signs seem few and far between. Cell phone service is iffy, and your GPS hasn’t a clue.  It keeps telling you turn left, but there is no left turn to take.

On one of those kind of drives, a true road trip if you will, you might find yourself doing something highly unusual these days.  Something that has caused a great deal of spousal bickering.  Something that generations of yesteryear wouldn’t have thought twice about:

Stopping and asking for directions.

Now if you find yourself doing just that, stopped at one of those little fruit stands or old time country stores trying to get unlost, you might need to know a few things about how a Southerner gives directions.

No. 1 We prefer to use landmarks over road numbers and street names any day.

Landmarks may include natural features, businesses, road characteristics, and acquaintance’s homes.  So instead of telling you to turn left at Church Street and drive 5 miles, a Southerner giving directions will tell you to take a turn pass the Little Savannah Baptist Church right by the giant oak tree lightning struck down last year.  But Mr. Winslow still hasn’t moved all the wood yet, bless his heart.  Now keep goin’ on that road a little ways looking for the highway, if you reach the Hamilton’s farm on the left where the barn is falling down around their ears you’ve gone too far.

No. 2 Expect to be quizzed about your heritage and place of origin.

Southerners don’t get in a hurry, and we love to converse, so don’t expect a straight up answer when you ask which way to the highway.  That’s too unfriendly.  We’ll try to ascertain if you are a Yankee or just an out-of-towner and whether you might know so and so.  Yes, Yankees you are almost always identifiable, but don’t feel too lonely cause city slickers are too.

No. 3 There will be storytelling involved.

There is nothing most Southerners like to do more than spin a good yarn.  And there you are a semi-captive audience with untainted ears having never heard the tale about Billy’s catfish who weighs 200 Ib.s and likes to be tickled on the nose – honest to God!

When a Southerner gives directions you’re going to get more information than you need much of it entirely irrelevant, but guaranteed to entertain.

No. 4 We love to use vague directional descriptors.

When a Southerner gives directions you will hear the following:

“That a way” – Usually followed with a very expressive hand gesture.

“Just up the road” – The road is flat you say.  Well, that don’t make no difference up is the way you’re going.

“Down the holler” – This has nothing to do with shouting.

“Over the mountain” – I know we are surrounded by them, but there are mountains and then there is the mountain.

No. 5 Be prepared to leave with something extra.

Most likely you’ll have a handful of suggestions on what to see and do, where to eat, and what to avoid on the rest of your trip when a Southerner gives directions.  Plus your car or truck load might be increased ever so slightly by a peck of apples or quart of honey.

Chances are When a Southerner Gives Directions this is How it will go:

Howdy! Where y’all from? Oh, Raleigh that’s a long ways off.  You’re headed to Franklin.  Now that’s a nice little town. My granny lives over that way. You got family there? No, well do you know the Fowlers? Oh, yes you’re almost there.  Just keep goin’ on this road.  It’s goin’ take you over the mountain.  The road is so curvy it’ll make your head spin, but you just keep on goin’ till you get down the other side.  Then you’re goin’ to turn at Miss Lacy’s house.  It’s the green one without a stitch of grass, but she grows the prettiest tomatoes. Lord they’re pretty.

Ok, let me think.  Oh, yes you’re goin’ to stay on that road a little ways maybe 5 minutes or so then take a left.  If you reach that pull off where Harrison’s hardware use to be you’ve gone to far.  Oh, no honey it’s not there any more.  Here now you’ve gotta come on inside and buy some of these apples. They were grown just up the road.

A Southerner’s directions may be enigmatic at times, interspersed with a few tall tales, and colorful to say the least, but don’t worry we’ll get you found for sure!

Partying at A Stroll Thru Life…

Pin this for later: 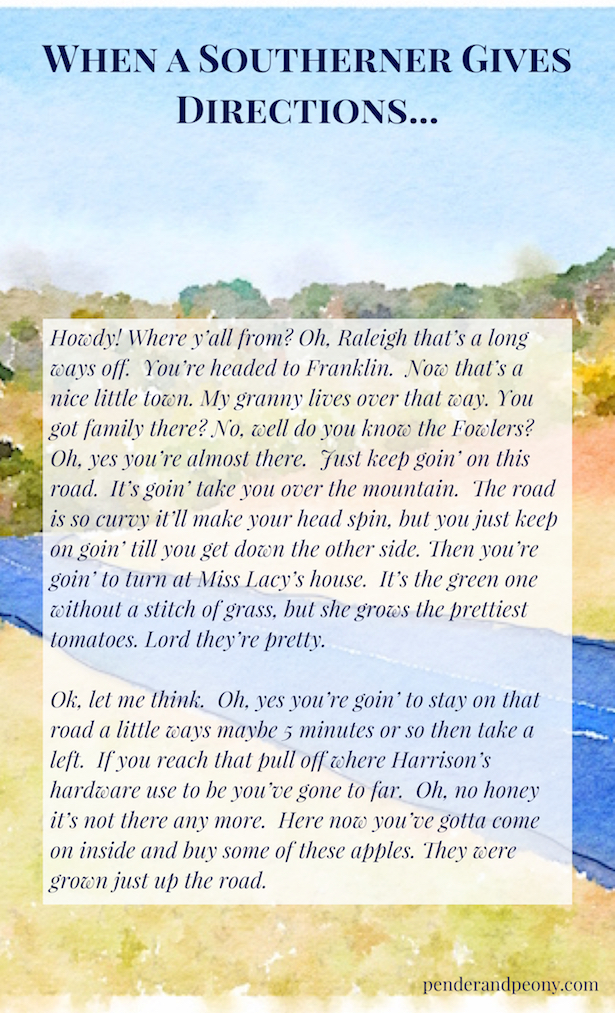 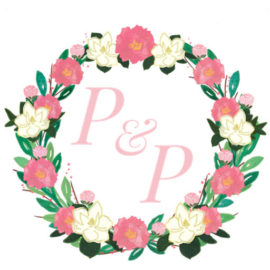