Useful basics to understand when collecting antique plates and ceramics from European porcelains to folksy Staffordshire and Chinese export to transferware. 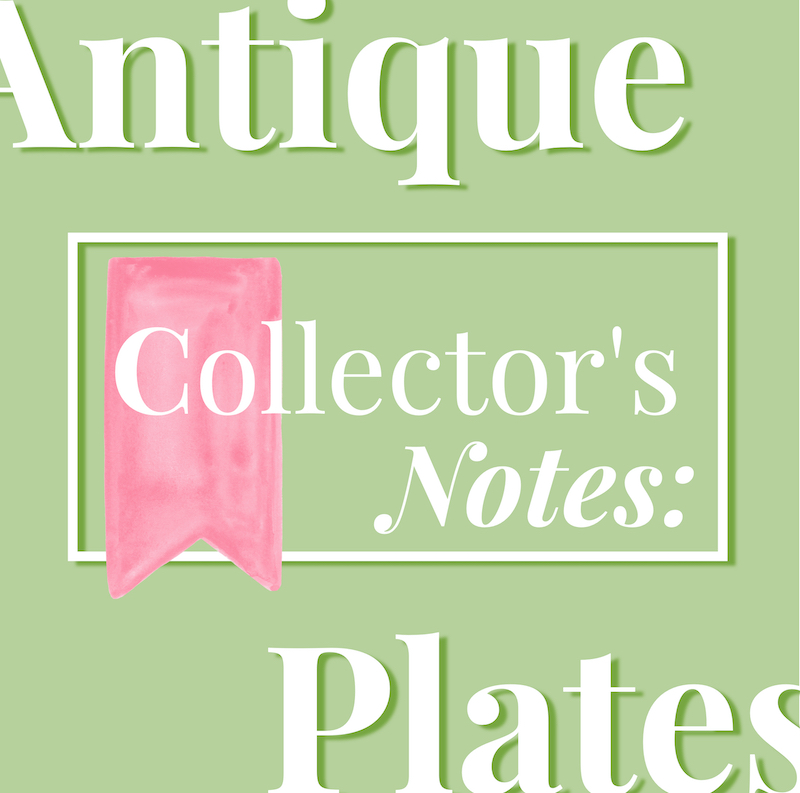 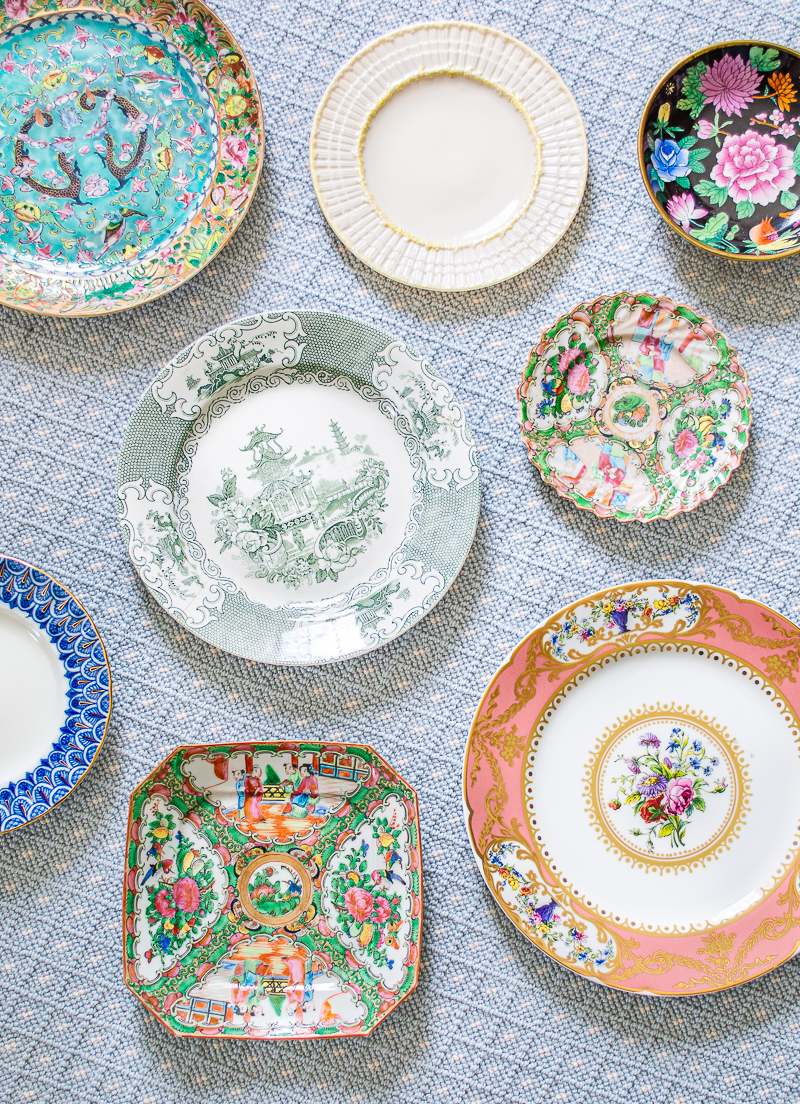 If you are a lover of china or collector of antique ceramics, your china cabinet or kitchen cupboards probably hold one or more of these ceramics:

Commonly referred to as “china” because it was first produced by the Chinese in the late Tang dynasty over 1000 years ago. This form of hard-paste ceramic is made with kaolin – a sought after material of decomposed feldspar with granite and petuntse that has to be ground down into a fine white powder then mixed with water to form a clay. Kaolin (often called china clay) is the fundamental element of hard-paste porcelain that gives it the durable body, luster, and translucence. 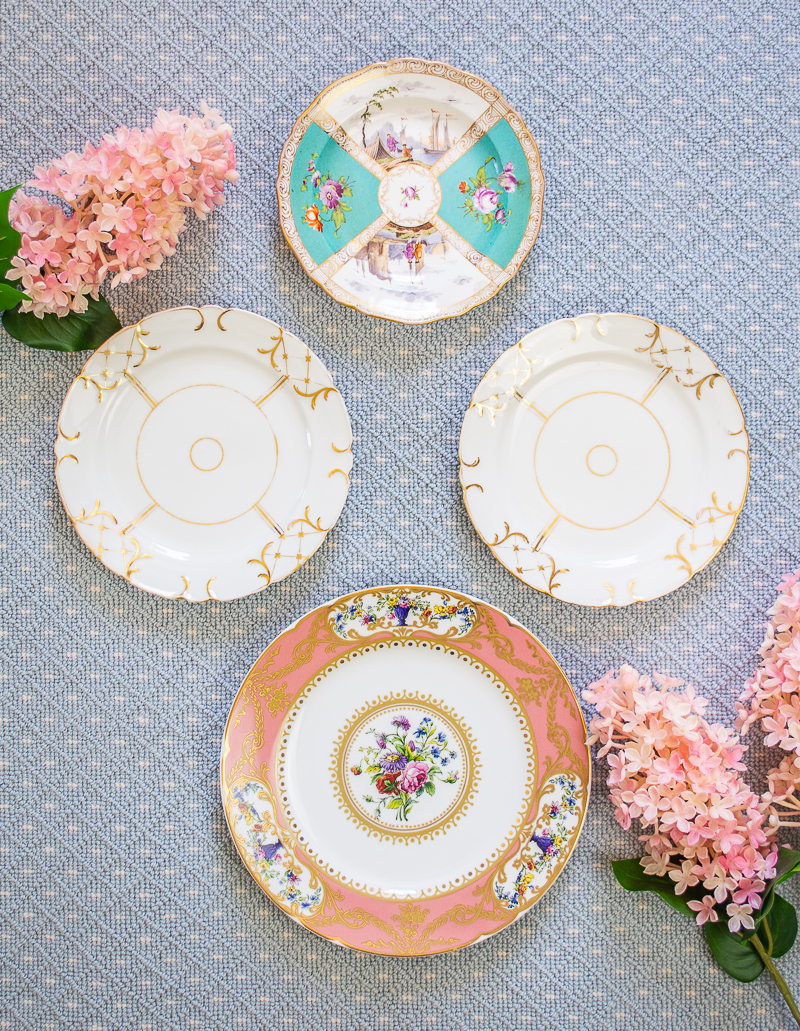 Developed in efforts by European potters to create Chinese porcelain, which was durable, white, and had the ability to withstand boiling water. There were a variety of different mixtures and materials used from glass, flint, quartz and or bone all to try and re-create the durable body and luster that kaolin gave hard-paste porcelain. Soft-paste refers to the need to fire these mixtures at lower kiln temperatures.

Bone china (historically called English Porcelain) is also important to include here as it was a key development in England in the late 1700’s created by Spode. As the name suggests the paste mixture included 30-50% animal bone (usually cow) with feldspathic material and kaolin. This produced a much more durable form of porcelain compared to other soft-paste forms and was competitive with the whiteness, durability, and translucence of Chinese or French hard-paste porcelains.

A type of pottery made from clay that remains porous even after firing. A slip or a glaze must be applied for the vessel to be water tight. This is the oldest type of ceramic dating back to the Neolithic era.

Depending on the type of slip or glaze used, you will see earthenware also referred to as creamware, tin-enameled or tin-glazed. 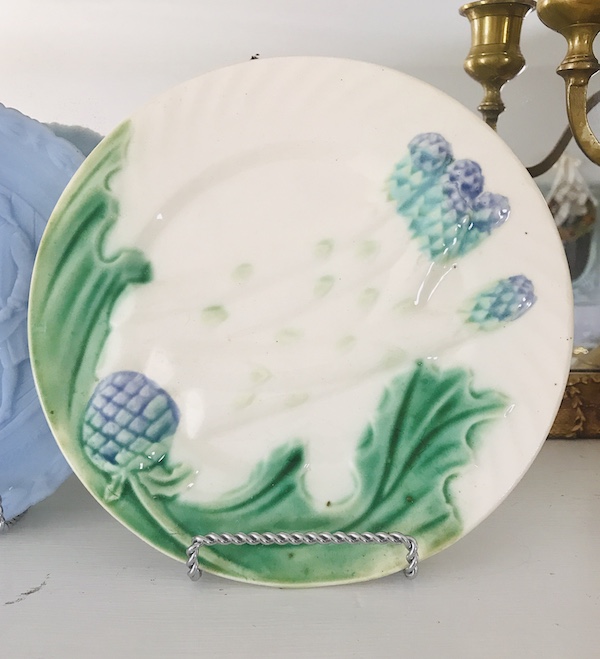 A type of pottery that has been fired at a high temperature until vitrified and is, thus, impervious to water. Glazes are mainly decorative and generally only 3 types are used: lead glaze, salt glaze, and feldspathic glaze.

Popular types of antique plates made from stoneware are Ironstone, Jasperware, Basalt, and Celadon. 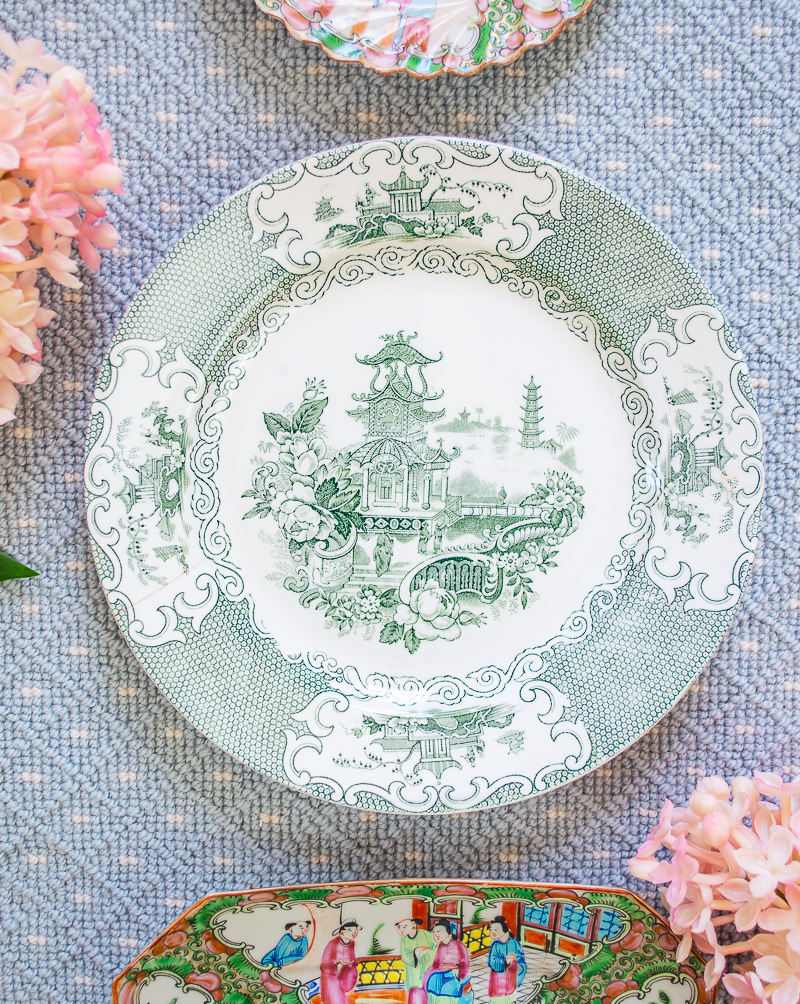 Now that we’ve reviewed and clarified the different types of ceramic plates, let’s look at some specific terminology used to talk about and identify antique plates.

It is often a point of confusion for beginning collectors when experts refer to a type or brand of plate by the region or city of manufacturing not the factory or brand name. For example, Limoges is not a manufacturer but a region in France where lots of porcelain makers sprang up in the late 1700s because kaolin was found there. These regional designations are largely useful because manufacturers in those areas shared common techniques and similarities in design.

Other important regions of production to know:

Lip – the outer flat raised width on the plate. 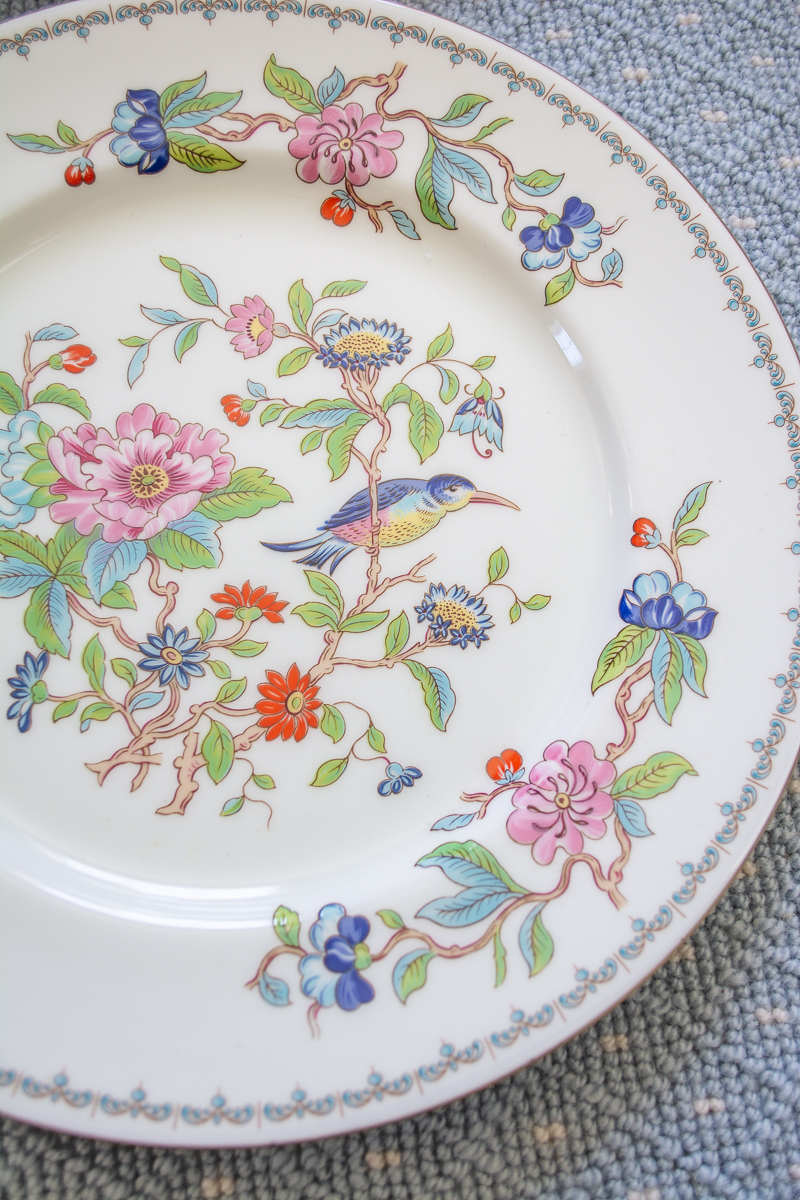 Well – the interior flat section where food is placed.

Rim – the outer most edge of the plate, often with gilt band.

Base or Foot – bottom or underneath side of the plate.

Glaze – a glossy or glassy film that is fused to the ceramic body during firing. It is usually formed from powdered minerals added to water and washed or painted over the object. A glaze can be shiny or matte. It is usually for decoration or protection, and most glazes can be considered specialized forms of glass. There are various types of glazes depending on the materials used the the effect achieved after firing.

Underglaze Decoration – layer of decoration applied to un-fired or un-glazed piece and then glazed on top of decoration. Example – blue and white porcelains

Reticulated – pierced lattice like design through the rim or edge of a plate. 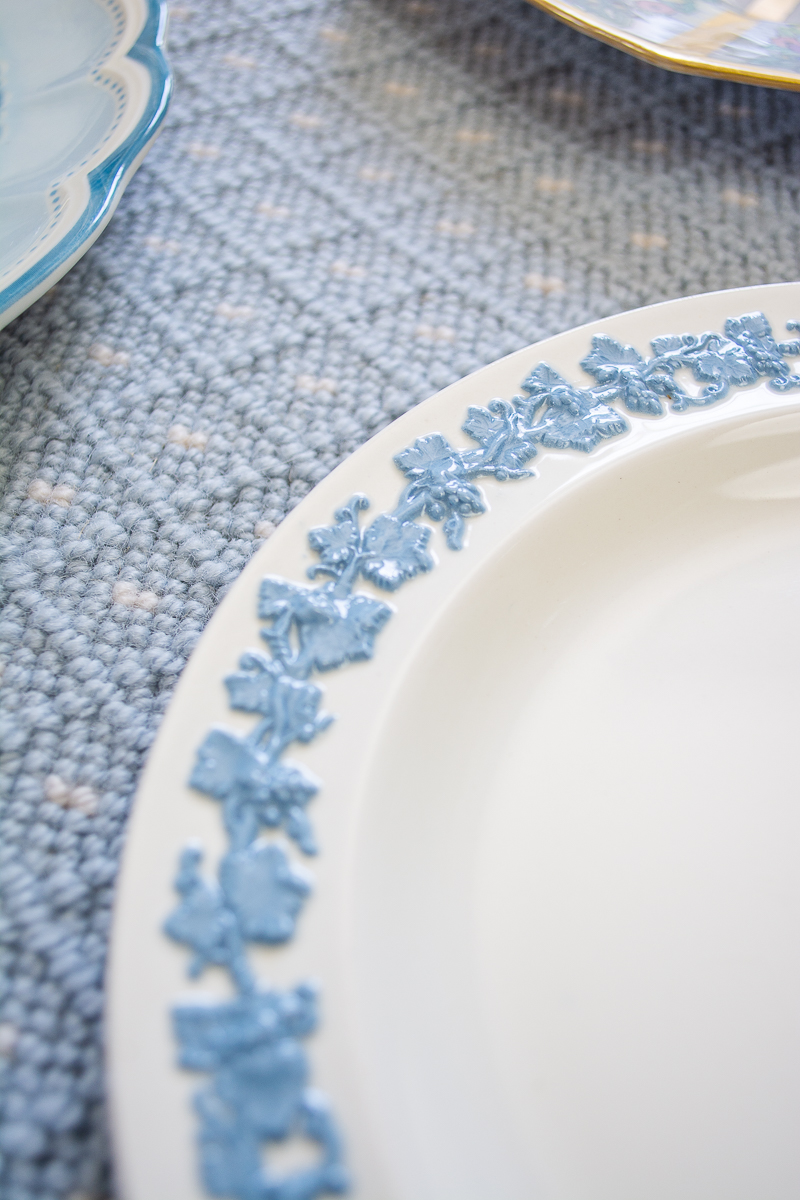 A significant portion of valuable antique plates are marked with a manufacturer’s emblem or logo on the bottom, but not all particularly pre-19th century mass production. Manufacuters’ marks often evolved over time either in design, color, or style, so they can be important in dating a piece as well as identifying who made it. 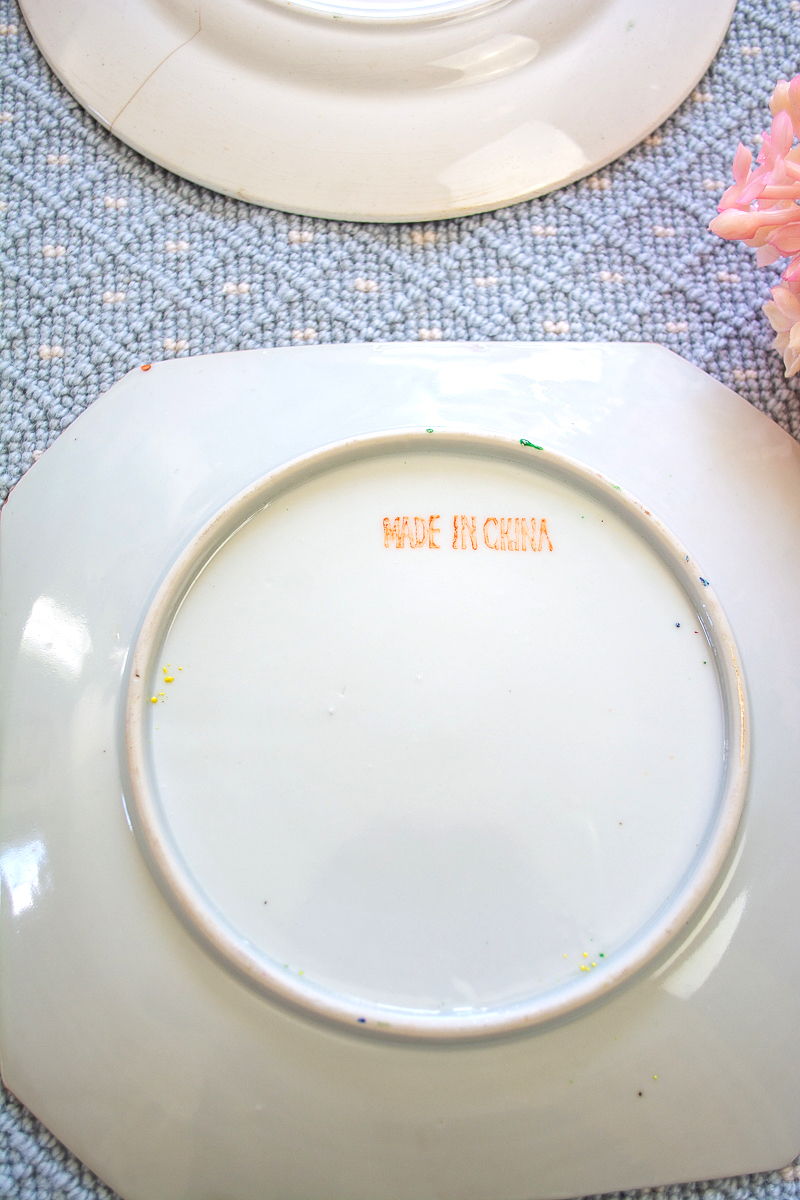 You may even notice several different marks on the bottom of a plate: 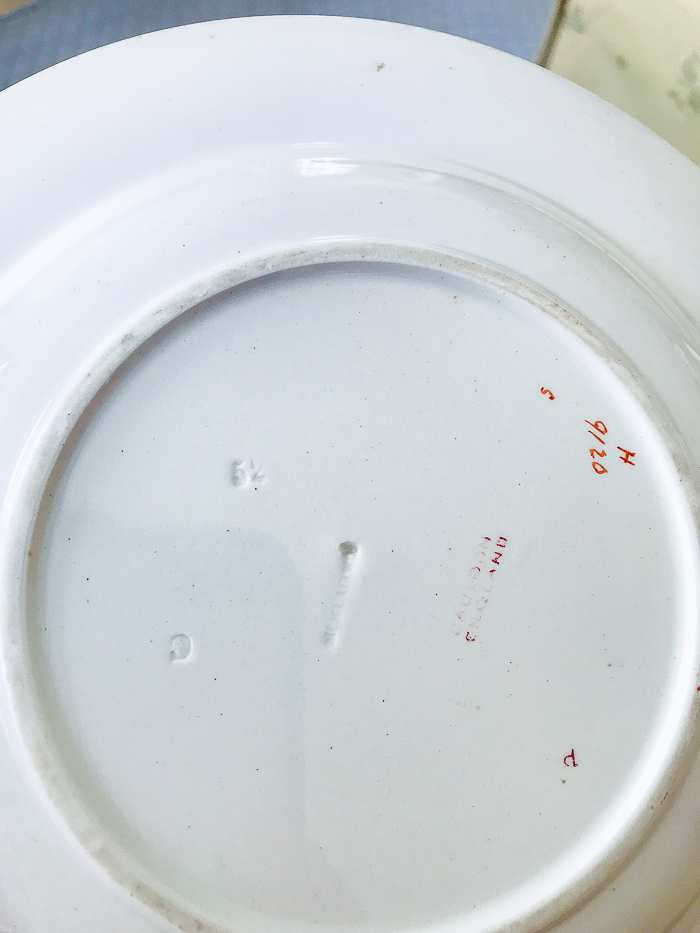 Pattern refers to the stylized design used to decorate a specific plate or group of ceramics. While a common enough practice now, most ceramic manufacturers did not initially name their patterns. Names either developed over time or they were identified with a pattern code, while some manufacturers have been assigned names by scholars like Arlene Schleiger did for Haviland.

How to Curate a Plate Wall

How to Install a Plate Wall 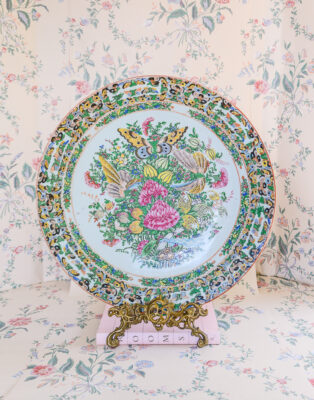 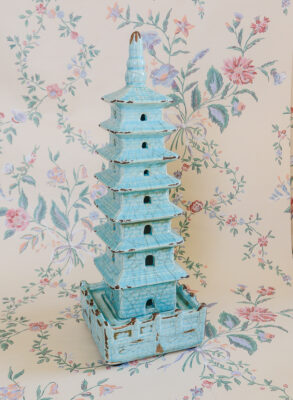 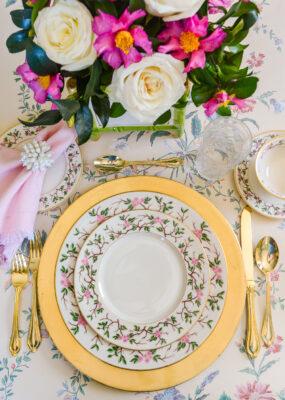 Have yourself a Merry little Christmas with friend

Christmas time is here… don’t wait to plan you

A quick look at how this Williamsburg inspired gar

Because I’m still here for the photos and this y